March 17 — “Bookwalk To the Land of the Imagination”

Bookwalk celebrated St. Patrick’s Day with a leprachaun and magic.

The Irish Heritage Group served up a delicious dinner of sloppy joes and Irish green salads. 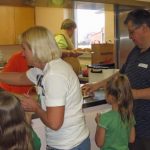 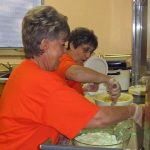 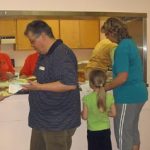 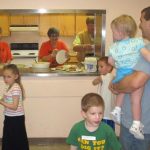 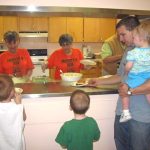 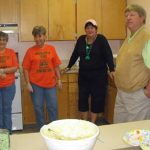 Rosetta read The Seven Magic Brothers to us.

Joan showed how a piece of paper was strong enough to support a glass of water.  Then we were able to slip through a small ring of paper. (The secret was a Moebus strip which we cut and the one small ring turned into one big ring.)

All of us have “magic” powers. We told each other what they were. Some people had good imaginations, some could cook, some were strong, some were good at basketball, some could fix hair, and some had eyes in the back of their heads.

We learned about the Dewey Decimal System which puts true (non-fiction) books in order so we can find them. Each of us wore a hat and sign representing one subject and set of numbers.

The second story we read was Little Gold Star. It reminded us of Cinderella.